This group represents a very large family of flies with over 1000 species in North America, all of which have a parasitic lifestyle. They vary considerably in appearance, but most have very bristled bodies and resemble house flies, although they can be substantially larger or smaller. The adult female typically lays an egg on the surface of the host insect cuticle and the hatching larvae then bores into the body of the host and develops internally. In other cases, the fly egg is consumed by the host insect in the process of feeding. Some species give birth to live larvae that are placed directly onto the host. A wide range of moth and butterfly larvae are attacked, and so are a number of beetle species. The host may be killed in the adult stage, but more commonly in the pupal stage. 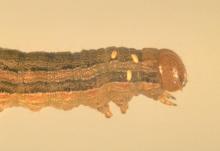 Tachinid eggs are laid on or near the head of caterpillars. The developing flies are deterimental or lethal to the host caterpillars.