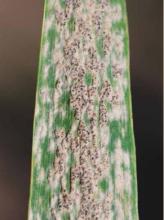 Powdery mildew is a common wheat disease that tends to be more problematic during mild weather during April and May. Mild temperatures, high relative humidity and dense stands of wheat favor mildew development. Powdery mildew can be seen on the lower leaves of susceptible varieties in late April or early May when wheat is in the joint to flag-leaf stage of development and can lower yield.

Signs of powdery mildew include white fungal growths on leaves and leaf sheaths. Glumes and awns also can be infected when the disease is severe. Fungal growth is largely limited to outer plant surfaces and can be easily wiped away by rubbing a finger across affected areas. Mature areas of fungal growth may have dark, reproductive structures mixed with the white, cottony growth of the fungus.