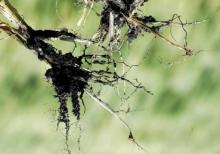 The common root rot fungus survives as spores in crop residue, but unlike many other root rots, it can also survive several years in the soil. Because of this and because the fungus infects many grasses, it is not practical to rid a field entirely of common root rot. Common root rot is most common between September and June, during moist, warm weather. Root and crown tissues are infected, and flower parts also may be infected if spores are splashed onto spikes that will remain wet for several days. Water stress after infection can worsen damage.

Common root rot mainly affects the roots and crown. Roots may be poorly developed and spotted with brown to black lesions. The crown is affected later in the season with similar symptoms-poor development and areas of brown discoloration. The infection is especially noticeable on the subcrown internode and coleoptiles where symptoms mirror those of the roots and crown. Diseased spikes turn white before healthy plants mature. Plants may be stunted and produce fewer tillers, and infected heads turn white and contain shriveled kernels.