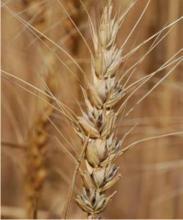 Common bunt and stinking smut are most commonly seed-borne diseases, but they can be soilborne and wind-borne as well. Seeds become contaminated during harvest, when smut spores from diseased plants stick to healthy kernels. Smut spores can survive in the soil for at least ten years, and seeds and young seedlings also may become infected when they are sown near these spores (soilborne). Smut spores and wheat seeds germinate at the same time, allowing the fungus to penetrate the seed before seedling emergence. The fungus continues to grow in its host until it has invaded the head and developing ovaries. The healthy plant tissue is replaced by the fungus, and the kernels are converted into spores by the time the plant reaches maturity. Hosts include wheat, rye, triticale, barley, and grassy weeds. These diseases are favored by cool, moist soil conditions (40-60°F or 4-16°C), so they are more prevalent and severe in fall sown wheat than in spring-sown wheat.

The symptoms of common bunt and stinking smut generally are not apparent until heading. Diseased plants may be stunted, and bunted heads may be a darker color of green and may stay green longer than normal plants. Heads of infected plants may also be smaller and their numbers reduced. After heading, diseased heads can appear slightly open due to the expansion of infected kernels causing the glumes to spread apart. In infected heads, diseased kernels, or bunt balls, are dull, grayish-brown in color and are filled with dark brown spore masses. The heads rupture at harvest and release spores that have a fishy odor due to the chemical trimethylamine.

Stinking smut and common bunt are controlled through seed certification and seed treatment.