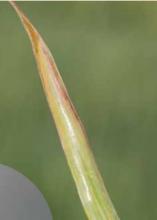 Hosts of barley yellow dwarf virus, a Luteovirus, include wheat, barley; oats, triticale, and over 150 grass species. Aphids feed on infected plants and transmit barley yellow dwarf to healthy plants in subsequent feedings. It is vectored by all the cereal aphids except Russian wheat aphid. Each aphid species transmits specific virus strains, but some strains can be vectored by multiple aphid species. There are five strains of the disease common to the United States including MAV, PAV, SGV, RMV, and cereal yellow dwarf. BYDV cannot be transmitted through seed or soil.

The barley yellow dwarf virus survives year to year in wild grass hosts and volun­teer small grains or is introduced to the field by virus-carrying aphids. Winged aphid migrations can be either localized or occur over several miles with favorable winds. BYDV is often associated with environmental conditions that favor the buildup of aphid populations including wet, cool summers, warm falls, and mild winter condi­tions. Irrigated areas also support aphid populations.

This viral disease causes wheat leaves to have a yellow or red discoloration. The discoloration is often more intense near the tip of affected leaves, giving them a flame-like appearance. Barley yellow dwarf often occurs in patches within a field. The size and distribution of the patches depends on the feeding activity of aphids, which spread barley yellow dwarf virus. Infected plants within these patches may be shorter than neighboring healthy plants.