Several species of wireworms can be found Great Plains:

The biology of these species are not well known, but they vary in the length of life cycles, their attractiveness to crops and soil conditions, and their geographic distribution. Generally, wireworms are a sporadic pest because they do not feed extensively through the fall when wheat root mass is most limited.

Wireworms are long, slender, and yellowish in color, with wirelike hard-bodies. They have three pairs of legs behind the head, and the last abdominal segment is flattened (Figure 7.46). Full-grown larvae may reach a length of 0.4-1.5 inches (1 to 4 centimeters). 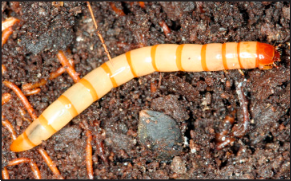 Adult beetles emerge from the soil in the spring (Figure 7.47a & b). From late May through June, the female beetles lay 200 to 1400 eggs in loose or cracked soil and under lumps of soil. Females of many species are attracted to lay eggs around grasses. The young wireworms hatch and begin feeding on roots or germinating seeds.

The larval stage lasts anywhere from 1 to 5 years, depending on the species involved. When full grown, usually in July, the larvae pupate in the soil. The adults do not emerge until the following spring. Wireworms overwinter as larvae deep in the soil. When soil temperatures warm in the spring, the larvae move to the surface to feed. Due to their long life cycle, the larvae can damage several successive crops, feeding on the roots of weeds, grasses, and crop plants. Once soil temperatures become warm and soil moisture decreases, the larvae migrate downward and may be difficult to find later in the season. When it is time to become adults, the larvae migrate back to the surface and pupate, and the adult emerges to mate and lay eggs in grasslands or weedy areas.

Wireworms feed on germinating seeds and roots of young seedlings, killing the seedlings and reducing stand. Wireworms are most active during the months of April through June and occur most often in fields that have little disturbance. Nonuniform growth or gaps in the stand may be due to wireworm feeding on germinating seeds. Wireworms are rarely a problem in fall planted wheat. They are generally more prevalent in sandier soils.

Wireworm infestations are difficult to detect prior to visible plant injury. They are most likely to be found following a long-term grass (native or pasture) or legume crop.

Sieve soil samples to find wireworms present in the field. Samples should be taken to a depth of six inches from several areas of the field prior to planting. An alternative method is to place bait stations in the field to monitor wireworm activity a couple of weeks prior to planting. Dig a hole approximately six inches wide and two to three inches deep and bury a nylon mesh bag with one cup equal parts untreated and soaked corn and wheat or freshly cut potatoes. Mound the soil over the bait to prevent standing water. Return to the stations a few days before planting to sift through the bag contents and surrounding soil, and record the number of larvae found per station.

An action threshold of about three to four wireworms per square foot is often recommended. If wireworms are found at this density or higher, seed treatment is usually warranted.

Neonicotinoid seed treatments will provide some control from wireworm damage. Seed treatments are primarily a protective measure and do not necessarily result in eliminating the wireworm problem from a field.

In fields known to contain wireworm larvae, fallow during summer with frequent tillage will lessen their impact. Damage from wireworm infestations during the seedling stage can sometimes be reduced by replanting, if replanting occurs before existing plants begin to tiller. Rotation with non-host crops is also effective.

False wireworms are beetle larvae that are similar in appearance to wireworms, but they belong to a different family of beetles. They are predominantly pests in semiarid regions.

There are several species of false wireworms that can damage wheat seedlings. The beetles are generally dark colored, long legged beetles that cannot fly. Eggs are deposited in loose soil. Larvae are very similar to the true wireworms but have longer legs and antennae. Larvae pupate in the spring and adults emerge in early summer.

Plant damage is similar to that caused by wireworms. With wheat, they usually attack the seed before germination. In dry soils, one larva may follow the drill row and destroy several seeds by eating out the germ, causing bare patches in the field.

Since the beetles cannot fly, populations tend to build up in areas of continuous wheat production.

Some indication of false wireworm activity can be obtained by monitoring fields during the summer. High numbers of false wireworm beetles in the summer would signal the potential of problems in the fall if weather remains hot and dry. In addition, soil samples can be sifted prior to planting.

An average of one larva per three square feet suggests an infestation of economic importance.

In the past, lindane seed treatments offered protection from this pest, but more recently has been withdrawn from the market. Neonicotinoid seed treatments are not highly effective against false wireworm larvae.

Piles of decomposing straw and vegetation provide attractive shelter for adults and should be avoided when possible. In addition, crop rotation may also be an important method to reduce damage.