White grubs are very sporadic in occurrence and seldom cause serious damage to winter wheat in the Great Plains. White grubs may be cause for concern in the same rotations where wireworms are found. Larval infestations are greatly influenced by crop rotation and soil type or texture. Infestations by Phyllophaga spp. are reported to be more common in light, sandy soils that are well drained. 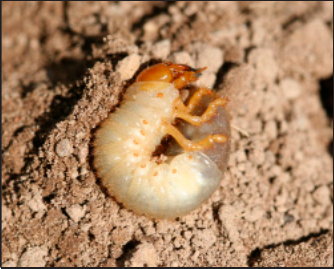 It is likely that several species of Cyclocephala (annual life cycle) or Phyllophaga (three-year life cycle) can be found in wheat fields in the Great Plains. White grubs are the immature stage of scarab beetles (Cyclocephala—chafer beetles; Phyllophaga—May or June beetles). White grubs are recognized by their white body color, brown head capsule, and C-shaped body (Figure 7.48).

Annual white grubs complete their life cycle in a single year. Beetles lay eggs in late June and early July. After hatching in July the larvae feed on roots and decaying organic matter in the soil. The larvae normally mature by early fall and feeding ceases. They overwinter as larvae, pupate, and emerge as adults the following spring. A common species in the Great Plains, Phyllophaga implicita, normally takes three years to complete its life cycle. During the spring of the first year, beetles emerge and at night fly to trees to feed. After mating, females return to the fields from which they emerged and deposit eggs in the soil during the day. The highest density of eggs will be found in the soil near the adult food source, such as shelterbelts (densities decline with increasing distance from the trees). First instar larvae begin feeding on organic matter after hatching, later feeding on plant roots. Most larvae reach the second instar stage before soil temperatures begin to decline in the fall. At this time, larvae dig deep into the soil where they spend the winter below the frost line.

In the third year, larvae feed on seedling roots but seldom cause significant losses. By early August, pupae and adults can be found at depths of 6 to 18 inches in the soil. Adults emerge the following spring.

During soil sampling in the late summer and fall, all larval instars, pupae, and adults can be found. However, one brood usually dominates, representing the greatest proportion of the population all three years. If so, significant feeding injury is expected only in one year out of three. The year of greatest injury should correspond with the second year of the life cycle, when second instars are the most numerous in the spring.

Larvae of white grubs feed on roots, severing plants at or above the crown (Figure 7.49 a & b). Plants are most vulnerable to this feeding when they are seedlings and have limited root mass. Associated damage may result from vertebrate predators aggressively digging up grubs and destroying plant stands. Damage is most often limited to spotty areas where populations are high or where soil conditions were optimum for egg laying and larval development. 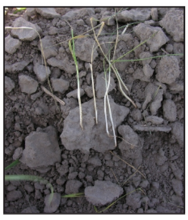 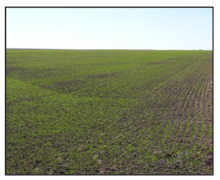 An assessment of specific fields is usually necessary to determine risk levels for white grub damage. White grubs stop feeding in the fall and move deeper in the soil. Early planting increases risk because plants will be growing longer during the white grub feeding period.

Larvae are present in the upper six inches of soil and begin moving down in the soil in the fall. In the spring, larvae return to the upper soil layers, but the damage potential for wheat in the spring is low because wheat plants have extensive root systems at this time and root feeding can be tolerated. Sampling during late summer and early fall is recommended.

Some areas use a threshold of four to five grubs per square foot, but thresholds can vary by region. These differences may result from different species of insects being found in different regions.

Serious infestations of white grubs are difficult to control, but neonicotinoid seed treatments may suppress populations.