The wheat stem sawfly has long been a severe pest of spring wheat in North Dakota and Montana. It was not a severe problem in winter wheat because the earlier maturing winter wheat was not attractive for egg laying, and larvae were not able to complete development before harvest. However, in recent years, winter wheat in the northern plains has seen increased damage from the sawfly. In the central High Plains, the wheat stem sawfly was not a pest of significance, presumably because of the predominance of winter wheat and lack of spring wheat. However, over the last two decades serious infestations have begun to occur and spread in southeastern Wyoming and in adjoining counties in Nebraska. It is unclear why the sawfly is becoming more prevalent in winter wheat, but its increasing presence in this region is worth noting and watching. Serious infestations are most often associated with no-till wheat production.

The adult wheat stem sawfly is a wasp-like insect about 3/4 inch in length (Figure 7.37). It has smoky colored wings and a shiny black body with three yellow bands across the abdomen. When present in the field, the adults are often seen resting upside down on the wheat stem. The sawflies will be active in the field when temperatures are above 50F (10C) and when conditions are calm. They are not strong fliers and usually only fly until they find wheat plants suitable for egg laying. Because of this, areas most impacted by the sawfly tend to be field margins closest to the adult emergence site. In western Nebraska, adults begin to emerge in May and can still be present in early June. The females begin to oviposit five days after they emerge. They will select the largest stems and insert a single egg just below the node. If populations are high, smaller stems will be selected and multiple eggs per stem will be laid. However, only one larva will survive in each stem. 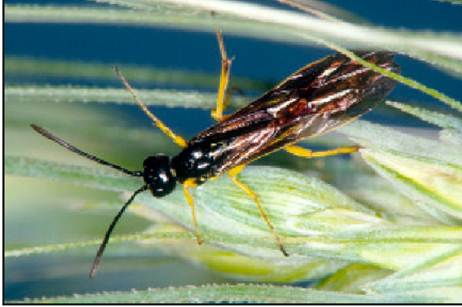 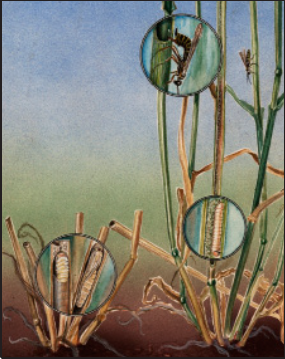 Sawfly larvae feed within the stem after hatching and gradually move down the stem, feeding as they move for about 30 days. The larvae are cream colored, ½ to ¾ inch in length, with a broad head. They will always be found within the stem and will assume an S-shaped posture when taken out of the stem. When mature, the larvae move to the area in the stem near the soil line and cut a V-shaped notch around the stem, weakening it at that point. The larvae then plug the stem at the notch and move down near the crown where it remains until it pupates the next spring (Figure 7.38). It produces a clear protective covering around it that protects it from excess moisture or moisture loss.

The presence of wheat stem sawfly can be verified by splitting the suspected stem from top to bottom and examining the interior. If the stem is packed with a sawdust-like material, it was infested with a wheat stem sawfly larva. The sawfly larva will likely be in the stem in a chamber just above the crown. Darkened areas on the stem just below the nodes is another clue of sawfly presence. These areas results from the internal feeding of the sawfly and can be used to detect the level of infestation without having to split each stem. As wheat approaches harvest, damaged stems lodge near the soil line. Both the lower end of the loose stem and the remaining stub have a distinct uniform cut at the break site, and both ends will have a saucer-shaped appearance with the hollow stem packed with sawdust.

The most dramatic impact of the wheat stem sawfly is the lodging of damaged stems and the subsequent losses from not being able to completely harvest these stems. This damage is very apparent at harvest time and will be easily observed by the combine operator. However, not all infested stems will break off and lodge. In addition to losses from lodging, sawfly larvae cause physiological damage of 10 to 15 percent to the infested stems.

The wheat stem sawfly can use several hollow stem wild grasses as hosts, including quackgrass, smooth brome, and wheatgrasses. The sawfly will not damage corn or broadleaf crops. Other cereal crops (barley, oats, rye) are not adequate hosts for the wheat stem sawfly to complete its development, even though eggs may be laid in the stems of these grasses.

Tillage will reduce wheat stem sawfly larval survival through the winter and spring. The objective of summer and fall tillage is to bring the stubs containing the larvae to the surface, so they will be maximally exposed to the dry conditions in the late summer and the cold through the winter. Blading after harvest or before winter will accomplish this by lifting the crowns and loosening or removing the soil around them. This can result in about a 50 percent reduction in sawfly emergence the following year. In contrast, spring tillage should bury the stubble so that the adult sawflies will have a problem emerging from deeper soil levels.

The use of a trap crop (barley, oats, rye, or solid stem wheat) along the edge of winter wheat strips may be effective, especially when populations are low to moderate. These trap crops will be attractive to the sawflies for oviposition, but the larvae will not be able to complete development. However, if sawfly populations are heavy, trap crops may not be enough to satisfactorily reduce damage because significant numbers of sawfly adults will move past the trap crops to infest the wheat.

Another cultural practice that will reduce sawfly potential is the use of larger acreages in block plantings rather than planting in narrow strips. Strip planting maximizes the ability of the sawfly to move from the old stubble into the wheat crop. Reducing the amount of border in the fields reduces the potential for damage throughout the field. Soil erosion issues come into play when considering this option, but it may be feasible in a no-till cropping system.

Solid stem varieties of spring wheat have been successful at reducing the amount of damage from the wheat stem sawfly. However, the effectiveness of this resistance is influenced by environmental conditions. No winter wheat varieties adapted to the central High Plains region have solid stems; however, Montana has developed two winter wheat varieties (Rampart and Vanguard) that are solid-stemmed. Yield data indicates these varieties are almost competitive in yield with commonly used adapted varieties.

Several natural enemies of the wheat stem sawfly have been noted in the northern plains, but in most years none of these have been identified as a major factor in reducing the population. The presence and effectiveness of natural enemies in the central High Plains has not been determined.

Insecticide control has proven to be an ineffective option because of the extended period that the adults are present and control is needed. Effective control efforts would require close monitoring to determine the timing of sawfly presence and repeated applications for most of the period adults are active.