The wheat stem maggot can be found throughout the region in host grasses and occasionally wheat. The damage from the maggot is very noticeable, and even low levels of infestation can appear dramatic. Severe damage is rare, and this insect remains only a minor pest of wheat in the region.

The wheat stem maggot overwinters within the lower portions of its host grass stems. The greenish maggot is 1/4 inch long. In the spring the maggot will pupate, and later, the adults will emerge. The adults will lay eggs on the leaves and stems of hosts that are in the late jointing to early heading stages. The small larvae will move to and bore into the upper stem, normally above the top node, where they will feed and develop. From spring to early fall, there are three generations of stem maggots. During each of these generations they utilize host grasses that are at the proper stage for development. Wheat, rye, and barley all serve as hosts, but wheat is preferred. Grass hosts include bluegrass, millet, timothy, foxtail, wheatgrasses, bluestem, and a few other grasses. 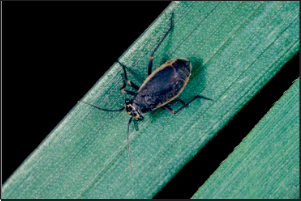 Wheat stem maggot larvae tunnel into the upper portions of the wheat stem just above the upper node, resulting in the severing of stems at this point. Subsequently, the wheat head will die and turn white. The appearance of these damaged heads is dramatic, and infestations of only one to two percent will be very apparent. Damage from this insect in some years is much more apparent than in other years, but the reasons for this are not known. In most years, damage is limited to less than one to two percent infested stems. Damage is more likely to occur in field margins next to wild grasses where the insect will be present. Wheat stem maggot populations may increase in no-till situations because larvae survive better in the undisturbed stems; however, the fly population is probably limited by its survival in host grasses during the mid-summer generation when wheat is not present.

There are few options available for managing the wheat stem maggot. No-till production practices may increase damage potential, but rotations that include non-host (non-grass) crops will reduce the potential for the buildup of wheat stem maggot populations. Also, control of volunteer wheat eliminates this host for insect buildup. Where practical, planting after the Hessian fly ‘fly-free’ dates will also reduce damage potential by avoiding the fly activity period in the early fall. Insecticidal control is impractical because of the difficulty in determining the optimum timing for control.