The wheat curl mite is a major pest of winter wheat in the Great Plains from Texas to Canada because of its ability to vector three viruses. In the western Great Plains, wheat streak mosaic has been the most serious disease in winter wheat, and more recently, High Plains virus and Triticum mosaic virus also contribute to the impact of this disease complex.

The wheat curl mite is tiny (less than 1/100 of an inch long), cigar-shaped, and has only two pairs of legs (Figure 7.11). Its hosts include wheat, corn, and several other grasses. The wheat curl mite feeds on the youngest leaves and almost always is found in protected areas, such as a curled leaf or deep in the leaf whorl. It also feeds and reproduces in the protected areas of the wheat head or corn ears. 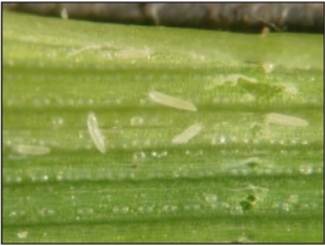 Because of the wheat curl mite's tremendous reproductive capacity, it can increase to very large populations when conditions are favorable. Wheat curl mites go through two nymphal stages after hatching from eggs. Development from egg to adult occurs in about 8 to10 days at 77F (25C). It has a continuous life cycle and overwinters in all life stages. Mites disperse among numerous hosts via air movement.

Wheat curl mite is found on winter wheat from the time it infests the plants in the fall until wheat maturity the following summer. It can survive off the green plant only a few hours to a few days depending on temperature and humidity. Under hot and dry conditions in the summer, mites likely will desiccate within 12 hours. To survive from the time of wheat maturity until emergence of the fall wheat crop, the mite must find "green bridge' hosts. The most important green bridge results when hail occurs prior to wheat harvest. Hail shatters wheat heads and kernels fall to the ground where they germinate rapidly and sprout into volunteer wheat. Wheat curl mite readily infests and transmit viruses to this preharvest volunteer.

Although not as important as volunteer wheat, corn also can serve as a green bridge host. Mite populations build up within the corn ears and exit as the corn dries down in the late summer and fall. Irrigated corn produces more mites later in the fall than dryland corn increasing the infestation risk around irrigated corn. Several other grasses and grassy weeds contribute to background populations of mites, and under certain situations may contribute to significant mite infestations.

Wheat curl mite is most often found feeding in areas of the plant with young, succulent tissues within the whorl of the plant. This causes the edges of the leaves to remain tightly curled inward (Figure 7.12). As the leaf curl is exposed, the mites move back into the whorl to colonize the next developing leaf. As the plant grows, subsequent leaves or awns on the head can be trapped in the previous leaf ’s curl causing distorted leaves or curled heads. Mite feeding damage is secondary to the vectored virus impacts; however, feeding during the heading stages, when mites can build to large populations, can reduce yields up to 15 percent. 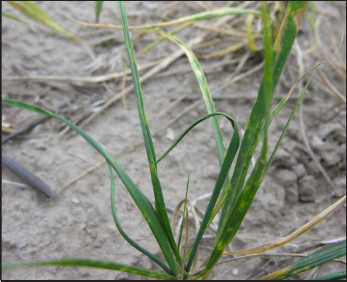 The greatest impact from the wheat curl mite is virus transmission. Loss estimates indicate that wheat streak mosaic causes an average of two percent per year loss in wheat. This yearly average includes a range from near zero to 13 percent, indicating a wide variance in its impact from year to year. Damage can also be quite variable from field to field. This estimate is likely representative of much of the western Great Plains. In addition, High Plains virus and Triticum mosaic virus have been found to be vectored by the mite. These viruses are widely present throughout the Great Plains, but their impact is very difficult to determine as they are almost always found with wheat streak mosaic.

Preharvest volunteer arising from hail has, by far, the greatest risk of serious mite and virus presence. Volunteer wheat growing in summer crops (e.g. sunflower, corn, millet) that emerges before wheat harvest can also be a threat if left uncontrolled. After harvest, mite activity drops to very low levels, and post-harvest volunteer will be infested slowly. The risk from postharvest volunteer will be greater in the southern plains because the green bridge period is much longer than further north, and there is more time for mites and viruses to build to significant levels.

Corn also can serve as a green bridge host. Mites move into corn just prior to wheat harvest. They build up in corn as the ears develop, and they move off corn as the ears are drying down. Dryland corn often dries down before wheat planting in the fall and carries a lower risk for virus problems. Irrigated corn stays green longer, and if wheat emergence overlaps with green corn, the risk of disease development increases.

Other potential green bridge hosts include several other grasses. The ability of mites to reproduce on these hosts is much less than wheat; so the risk from their presence is much lower than that for volunteer wheat.

Commercial wheat varieties resistant to the wheat curl mite (e.g., TAM 107) are available. However, mite biotypes have developed in the region that can overcome this resistance. There are several sources of resistance to the mites in wheat and closely related grasses, but the optimum use of these resistant genes in wheat varieties has not been determined due to the biotype issues. Currently, new wheat varieties are being developed with much higher levels of resistance to WSMV than previously available. However, these varieties are not immune to the disease and some may require additional management (e.g., adjusting planting date) to maximize their effectiveness in the field. Check with local extension sources for availability and other recommendations.