Say stink bug is a minor pest of wheat. They are seldom numerous enough during the susceptible stages of wheat to warrant control measures. However, they may be more numerous in wheat fields during the late heading stages when their impact is substantially reduced.

Adults are green, shield-shaped, and about ½ inch long (Figure 7.45 a; b). They have yellow to orange spots on their back in the triangular area between their wings. Females lay small, barrel-shaped eggs in clusters or rows on plant stems or surfaces. The small nymphs are dark and more oval shaped. The larger nymphs are green and similar in shape to the adults. They will take about six weeks to go from egg to the adult stage. They feed actively in the morning and late afternoon. Say stink bug overwinters as adults within plant debris in fields and field borders. They undergo one to three generations per year, depending on the length of the growing season.

Say stink bug feeds on weeds, especially Russian thistle, and other wild hosts in the spring before dispersing into cereal grain fields during heading and grain fill. Both adults and nymphs have piercing-sucking mouthparts, and their preferred food source is developing seeds. Say stink bugs are attracted to wheat starting in boot stage, and the bugs will continue to feed on maturing grains until they begin to harden (hard to soft dough). Feeding during the boot stage can destroy the entire head and result insterile, sun bleached heads. Feeding during the early heading stages can reduce both grain number and weight. Yield losses of 75 percent or more can result from feeding by one or more stink bugs per head between late boot and milk stage. Feeding during the later heading stages reduces only grain weight. Shriveled, deformed, and light grains are symptomatic of Say stink bug feeding. Damage potential falls rapidly after milk stage, and small reductions in test weight can occur from feeding during the dough stages. 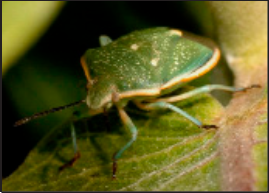 Specific management for the Say stink bug is seldom necessary. Controlling weed hosts in and around wheat fields during the spring reduces the risk of problems because the overwintering adults will not be attracted to the area.

Use a sweep net and sample weeds and wheat in the field margins to determine populations. For wheat in the boot to milk stage, consider treatment if infestations exceed three to four adult stink bugs per 100 sweeps with a standard insect sweep net. Stink bugs are highly mobile, and they may readily move out of an area. Also, stink bugs present late in the season may be attracted to secondary tillers that contribute little to yield.