Wheat is very responsive to fertilizer P applications on soils that do not provide adequate amounts of this essential nutrient. After nitrogen, phosphorus most commonly limits wheat growth and development. Across the Great Plains region, large acreages of wheat have reduced profitability due to inadequate fertilizer P. Adequate fertilizer P is more important than fertilizer nitrogen in some cases. About 0.5 pounds of P205 is removed with each bushel of wheat.

Functions of P in plant growth and development include major roles in energy metabolism and transfer. Phosphorus also has vital roles in respiration, cell division, and photosynthesis. Additionally, phosphorus is required for protein formation and many other plant constituents and processes. A shortage of phosphorus adversely affects many aspects of wheat growth, development, and reproduction.

Early shortages of P in wheat result in substantially reduced root system development and stunted overall plant growth. Because of its importance in root growth and development, shortages often result in increased susceptibility to winter injury. This inadequate early root development also increases the susceptibility to moisture stress. In addition, adequate P is needed for tillering, head formation, and grain filling. While purpling of stems and lower leaves is a common symptom of P deficiency, stunted growth and poor tillering are more visible early indications of P deficiency in wheat. Purpling is not always apparent in wheat. As wheat approaches heading, poorly tillered stands and maturity delays of several days are a result of P deficiency.

Soil testing helps identify soils that are likely to limit wheat profitability due to inadequate P nutrition. However, it does not tell us how much P is “available” in the soil. Due to complex soil reactions, soil testing only provides an index value that can be used to estimate fertilizer P needs for specific conditions encountered in the field. Meaning of index values varies depending on the specific soil test procedure used, the depth the sample was collected from, and other field specific factors that affect P uptake by wheat.

Three soil test procedures are available to help assess a soil's ability to adequately supply P to growing wheat plants. The Bray P-1 procedure is commonly used on soils that are neutral to acidic (pH below 7.3), but is generally less reliable on calcareous soils. The Olsen P soil test was developed for calcareous soils commonly found in much of the Great Plains. The Mehlich III procedure performs well on neutral to calcareous soils. Each test provides an index value only, extracts different amounts of P, and must be interpreted differently. The Mehlich III procedure has generally been shown to extract about 5 to 10 percent more P than the Bray P-1 procedure, while the Olsen P test extracts about 65 to 70 percent as much P as the Bray P-1 test.

Figure 5.7 indicates the relative yield that can be expected at various P soil test indices for wheat. For example, with a Bray P-1 soil test index of 10 ppm, about 75 percent of the maximum yield can be expected if fertilizer P is not applied. Similar results have been obtained across the Great Plains. However, these are only estimates and the amount of response that actually occurs may be more or less in a specific year for a specific field. 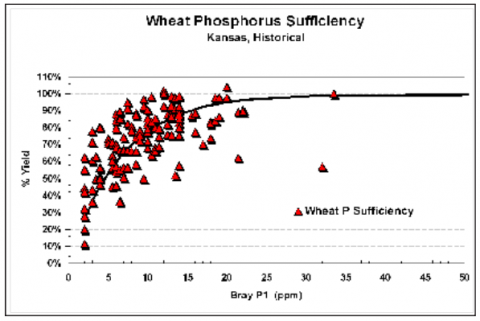 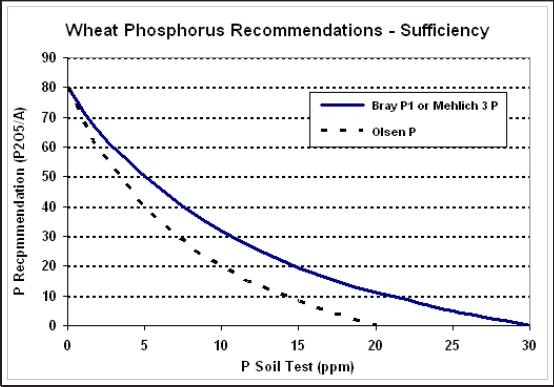 Figure 5.8 provides some general guidelines for fertilizer P application rates. Most states in the Great Plains will have P recommendations that will be fairly close to these, although most will also include a yield potential component. This approach is called a “sufficiency” approach and on average should provide for optimum economic returns in the year of application. In some years, sufficiency recommendations may be too high, while in other years the recommendations may be too low for optimum economic results. Since these guidelines do not result in the building of P soil test index values to non-limiting levels, P fertilization cannot be skipped for a year without decreasing profitability. If the long-term P fertility goals of individual growers are to build or maintain P soil test indices at non-limiting values in order to provide for future P application flexibility, the guidelines for the build-maintain approach would be more appropriate.

The build-maintain approach is to follow P application rate guidelines that are based on building soil test P index values to a point where P nutrition is not usually limiting to optimum wheat growth and development, and then maintaining these levels by annually applying the amount of P2O5 removed in the harvested portion of the crop until soil test levels are high enough that no P is recommended. While these guidelines may not always provide maximum economic return in any given year, they do provide for long-term economies and flexibility. Four, six, and eight year buildup guidelines are presented, depending on the overall rotation and P management goals of the individual grower (Table 5.1).

Phosphorus is immobile in soils and therefore stays where it is placed. As a result, fertilizer P applications need to be made at or before planting. The method of P fertilizer application is at least as important as application rate, especially for low P testing soils or shallow tillage. For systems that include unincorporated tillage, surface applications are generally ineffective since the fertilizer P is not placed in the root zone. In the Great Plains, where low P soil test index values and shallow/minimal tillage are common, placing the P fertilizer with the seed (drill-row) and preplant deep banding (which places fertilizer P three to eight inches deep on 15 to 18 inch spacing) are better choices than broadcast applications. Both of these methods ensure fertilizer P is placed in the root zone, while minimizing soil fertilizer contact.

However, for long-term no-till systems, it is possible that surface broadcast applications will be much more effective than in traditional production systems that included tillage. Because of a change in soil moisture content and root development near the soil surface immediately below the residue, wheat root uptake of shallow P would likely be better. Band P applications are still desirable if possible, but broadcast P applications would seem to be a good complement to band P applications systems.

There continues to be much discussion about the agronomic performance of various P fertilizers for wheat production. The effectiveness of various P fertilizers, applied at equal amounts of available phosphate in a similar manner, is generally equal. It is often implied that monoammonium phosphate (MAP, typically 11-52-0) is superior to diammonium phosphate (DAP, 18-6-0) for wheat production, particularly if applied with the seed. Many field comparisons between row applied MAP and DAP for wheat have been conducted, with the overall results indicating no differences between the two materials. Likewise, comparisons between liquid and dry P fertilizers have generally provided similar conclusions. However, application equipment to band apply liquid P is much more common than for dry P sources. Differences between dry and liquid sources of P are generally more related to logistics, flexibility in specific placement relative to the seed/openers, and ease of fitting/retrofitting equipment for efficient fertilizer application. 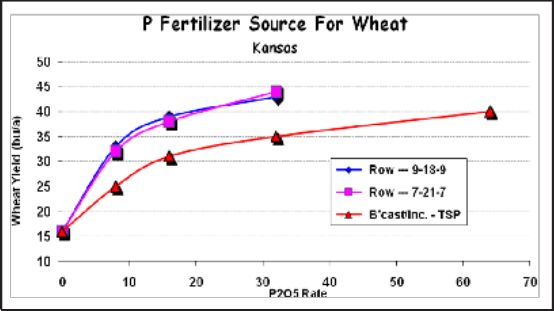 In general, on low P soils, comparable wheat yields can be obtained at lower band applied P rates than for broadcast P. However, these reduced rates will not optimize production efficiency and profitability since additional yield response may occur at higher, fully adequate rates. Additionally, if P application rates are consistently reduced below crop removal values, P soil test values would be expected to drop into the low (very crop responsive) category. Band P application methods should be adopted to make money, not as a way of saving money. 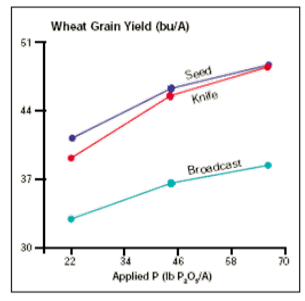 How Much P Fertilizer Can Be Placed With The Seed?

In general, it is the amount of nutrients other than P which limit the amount of fertilizer that can be safely placed in direct seed contact. When developing a fertility program which includes row applied fertilizer, N and K (K20) should be considered, not the amount of phosphate applied with the seed. Also, as the row spacing becomes narrower, the amount of nutrients that can safely be row applied increases. As a rule of thumb, for six to eight inches row spacing, the maximum amount of N + K20 that can be safely placed in direct seed contact is 30 pounds per acre. For 10-inch spacing, do not exceed 24 pounds per acre, while 12-inch spacing should not exceed 20 pounds per acre. When seeding late, or in dryseedbeds, reduce these amounts by 25 to 30 percent (Figure 5.11). 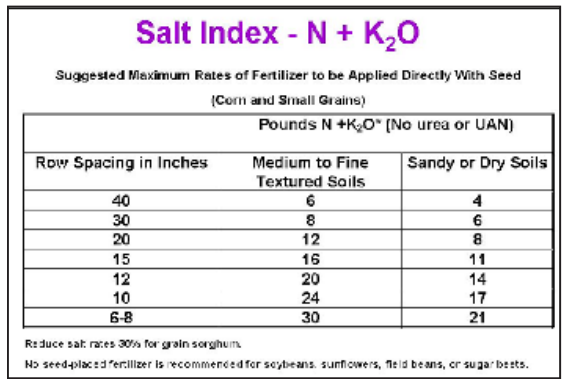 Phosphorus deficiencies are relatively widespread and result in reduced profitability across the entire wheat producing area. While the best way to identify fields likely to respond to fertilizer P applications is through a sound soil testing program, deficient fields also can be identified by visual examination. Thin, poorly tillered fields that do not seem to respond to fertilizer N are frequently P deficient. Eroded slopes and hill tops are also prime candidates, but many nearly level fields are also low in P availability. Phosphorus deficiency causes a reduction in root development, which is associated with increased winter injury. While band applications are desirable in areas with shallow or minimal tillage, broadcast P applications work well when fertilizer P is thoroughly incorporated and in long-term no-till systems. Phosphorus application rates should not be reduced if band P applications are used. It is important in profitable wheat production systems to identify fields or portions of fields likely to be low in P and to apply adequate amounts of fertilizer P in an efficient manner.