The pale western cutworm is a sporadic pest that is distributed throughout the western Great Plains. It reaches damaging populations, primarily during dry periods. Pale western cutworm can feed on a vast array of crops and weeds, but its major economic impact is limited to winter wheat.

The pale western cutworm moth is gray to brownish white with a body length of just under 3/4 inch and wingspan of 1 3/8 inches. The distinctive characteristic of these moths is the white undersurface of the wings. Moths begin to emerge in late August and quickly increase in numbers, peaking by mid September. They are attracted to areas with loose soil to deposit their eggs, and in areas where it is most severe, the moth flight coincides with tillage and planting of winter wheat. Each female lays 250 to 300 eggs in the upper 1/2 inch of soil. Moth activity decreases by early October. Some eggs may hatch during a warm spell in the fall or winter, but most hatch early in the spring when temperatures at the soil surface reach 70°F (21°C). This may occur from February through March.

Young larvae are small and very difficult to find. Larvae pass through six to eight stages before they cease feeding and pupate. Until they are about 1/2 inch long, they are grayish white in color. As they get bigger they become a grayish-green color. The pale western cutworm is pale with no distinct markings on its body (Figure 7.20). When fully grown, the pale western cutworm is about 1 1/4 inches long. The only other cutworm likely to be present in fields at this time is the army cutworm, which generally is larger because it begins development in the fall. Also, pale western cutworm larvae are lighter in color than the army cutworm, which has distinct striping on the body (Figure 7.21). Pale western cutworm feed through the spring and mature in May and early June. The larvae are capable of surviving extended periods (up to a month or more) without food. They then burrow into the soil and form earthen cells where they pass most of the summer, pupating in early August shortly before they emerge as adults. 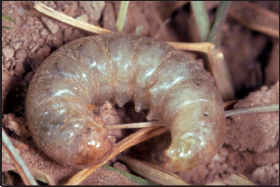 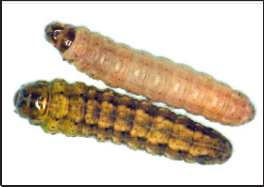 The pale western cutworm has a very broad host range, including many weed species. It is a subterranean cutworm in that it primarily feeds below the soil surface. The depth at which it feeds is regulated by the moisture line in the soil. These cutworms avoid moisture and stay just above this moisture line. Under wet conditions the cutworms actually will come to the surface and feed on the above-ground part of plants. This activity increases the rate of predation by birds and other insects, and parasitization. Increased moisture levels at the surface also increases disease incidence in the population.

Because of the feeding habits of the pale western cutworm, fewer larvae than army cutworm are necessary for severe damage. These cutworms cut the plant off below the soil surface by notching or completely severing the stem. This damage appears in winter wheat as dead or wilted tillers. Pale western cutworm damage is likely if these tillers can be easily pulled from the ground and no roots are attached. Since the cutworms eat only a small portion of the plants they cut, their potential for significant damage is greatly increased.

Damage often continues along a row or expands in patches until few tillers are left. Severe infestations can completely destroy a stand. Infestations within a field are usually spotty and are first evident in the lighter soils on knolls or hills, or areas with southern exposure (Figure 7.22). Later, the cutworms move out into the surrounding areas. Early feeding by small larvae appears as shotholes or ragged edges on the leaves.

Figure 7.22 Damage in fields occurs along rows or patches and expands outwards. 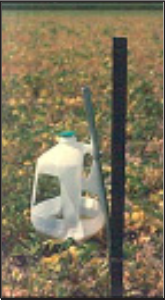 Moth populations in the fall can be determined by using light or pheromone traps to monitor flights. This information can be used to predict the risk of serious infestations the following spring. Pheromone traps (plastic milk jug trap, Figure 7.23) are easily used to monitor the pale western cutworm because the lures are specific to this cutworm. Traps should be set up in mid to late August and monitored weekly through September into early October. Pheromone trapping totals of more than 200 pale western adults for this trapping period indicate high risk. Other environmental factors will influence risk levels.

Estimating the severity of an infestation of pale western cutworms in wheat is difficult. Infestations tend to be spotty throughout the field, so scouting should be done early to avoid severe damage in localized areas. When scouting, look for early leaf damage. Another indication is the presence of a few dead or wilting tillers in wheat. Population density can be assessed by digging and screening the soil from one foot of row. The sample should be dug to a depth of at least three inches and extend from row center to row center. Several samples at different sites should be dug for a reliable estimate of population density and area of infestation. Often an area of severe infestation may not be extensive, and such areas could be spot treated to avoid the cost of a complete field application.