Nitrogen is the nutrient with the highest potential for limiting profitable wheat production. Since N is a constituent of chlorophyll, the green pigment allowing plants to convert the energy in sunlight into carbohydrates, a shortage of available N has wide ranging effects on wheat growth and development. Nitrogen is also anessential constituent of proteins, nucleic acids, and many other plant components and processes.

The most obvious visual indication of N deficiency in wheat is the lack of dark green color (Figurt 5.5). In small plants, the whole plant will have a light green color, while in older plants the lower leaves will turn yellow and die from the tips back (Figurt 5.6). Until the milk stage, plants should have an overall dark green color since N in the lower leaves has not begun to be translocated to the grain in substantial quantities. If the plant does not have a good green color or the lower leaves begin to yellow much before this stage of development, N is likely deficient. During the milk stage of kernel development. the plant will begin to move large amounts of N from the leaf tissue to the grain. The plant will gradually yellow from the bottom up as the plant approaches maturity. 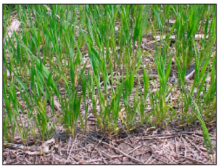 Stunted growth and poor tillering are also visible indications of N deficiency, although shortages of other nutrients, especially phosphorus, will provide similar symptoms. Low grain protein is also an indication that N was limiting during growth and development. For most hard red winter wheat varieties, grain protein of less than 12 percent may indicate that N was deficient. 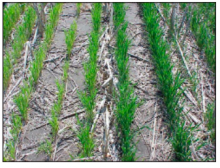 How Much Fertilizer N?

Nitrogen requirements for wheat are generally thought of as being directly related to yield potential. Hard red winter wheat with a protein content of 12 percent will require a total of about 2.4 pounds of available N per bushel of production. Keep in mind that these N requirements need to be met by both soil and fertilizer N sources. This includes residual profile N, N mineralized from soil organic matter, credits from previous manure application, and N from previous legume crops. Some states use residual profile N and yield goal to estimate wheat N needs, while Nebraska bases N needs on residual profile N and wheat-fertilizer price. Kansas uses soil organic matter, yield potential, and residual profile N for N recommendations. Final rate suggestions are fairly similar among these approaches. A suggested N rate recommendation approach is presented below:

Manure and legume crops included in rotation with wheat may provide a portion of the N needed by the wheat crop, but likely not as much as for summer growing crops. Nitrogen found in legumes and manure is unavailable in organic form and is not available until decomposed by soil microbes. Since wheat growth occurs in relatively cool soils, significant amounts of decomposition do not occur during the time that wheat is actively growing. This is the reason that no N credit is given for a soybean crop harvested immediately prior to wheat planting.

In the Great Plains hard red winter wheat region, a soil nitrate N test is a management tool that can be used to estimate residual soil nitrogen. The amount of nitrate N present in the top two to three feet of soil provides a reliable estimate of the amount of available N present in the soil profile from prior soil organic matter N mineralization, legume and manure decomposition, as well as any residual N carryover from the previous crop. Winter wheat is sown in the fall when soils are still relatively warm, and additional N will be released by microbial organic matter decomposition after the wheat is planted until the soil cools. Preferably, soil samples are collected no earlier than about two to three weeks prior to planting so that a good estimate of mineralized N is obtained. Soil samples collected earlier will not measure some N mineralized in late summer or early fall, while waiting longer to collect samples may not allow enough time before preplant N must be applied.

The key to successful wheat N management programs is having adequate amounts of N available in the root zone when it is needed by the wheat crop. Focusing strictly on fertilizer N application rate will not make a producer money unless it is applied in a timely manner. While large amounts of N are not required in the early stages of wheat growth and development, adequate amounts are essential for setting the stage for profitable wheat production. Too often, the wheat plants perceived need for N is related entirely to the amount of above ground growth that is occurring. Since the bulk of the wheat plant's visible dry matter production occurs after jointing, it is assumed this is also the most critical time for N application. The important growth that is not visually apparent, the development of the root system, is often forgotten.

Additionally, productive main tillers of winter wheat are generally developed in the fall. Since tiller formation occurs early (fall and upon breaking winter dormancy for winter wheat), allowances for early N nutrition are extremely important. Also, spikelet formation occurs in the three to four week period prior to jointing, and adequate N needs to be in the root zone during this period to assure optimum head size development during this critical development stage.

In most of the hard red winter wheat region, top-dress applications can be made in late fall or during the late winter or early spring period. In these areas, the lack of overwinter precipitation needed to move the fertilizer N into the wheat root zone often results in temporary positional unavailability of the applied nitrogen. Additionally, herbicides are often included in the top-dress application, and some of these herbicides have provided best results when applied in the fall or very early spring when the weeds are very small.

Typically, winter wheat recommendations call for top-dress N to be applied by jointing, but there are sound reasons to not wait this long. If top-dress applications are made late, near or after jointing, and sufficient precipitation is not received to move the applied N into the root zone, the applied N will be positionally unavailable and yields will suffer. On the other hand, waiting until jointing to make top-dress applications increases the risk of not getting the required N on until well after jointing in the event of a wet spell, or possibly not getting it applied at all. Furthermore, equipment traffic in wheat fields causes minimum damage if applications are made early. After jointing, the stem below the joint may be broken by application equipment resulting in tracks that remain through harvest and increased susceptibility to disease.

While research across the Great Plains on medium-fine textured soils has not shown agronomic benefit to splitting N applications between preplant and top-dress, this is a good option in many situations. Applying 30 to 40 pounds of N preplant and saving the balance of required N for a top-dress application provides N early for the important fall growing period, while allowing the producer to more accurately assess the yield potential and fine-tune the final N application rate. With the advent of more and more long-term, no-till wheat in the region, the importance of applying some of the N preplant would seem to be especially valuable. However, there have not been advantages to making multiple split top-dress N applications.

For wheat grown on the sands, clay-pan, and poorly drained soils, about 30 to 40 pounds of N per acre should be preplant applied to ensure early root development
and tillering, while protecting the bulk of the total required fertilizer N from potential movement deep into the soil profile with fall-winter precipitation. The balance should be applied in a top-dress application at, or slightly before, wheat green-up. This will allow for adequate N nutrition during tillering and spikelet formation stages of wheat development, while protecting against potential N loss during the winter.

For irrigated wheat grown under center pivot irrigation systems, especially on sandy soils, splitting the N between preplant, spring green-up, and jointing is a fertility management system that should be strongly considered. By applying N through the irrigation system, the N will not be dependent on precipitation to place it in the root system and application is not likely to be delayed by weather, while application costs will be minimized.

All of the commonly available N sources will perform well when fitted into a well designed fertility management program. For preplant N applications, urea, UAN solution, and anhydrous ammonia all fit into many production programs adequately (except in poorly drained soils). Both UAN solution and ammonia are often subsurface injected, while both UAN solution and urea can be broadcast surface applied. UAN solution may also be surface banded. For wheat grown in rotations that include tillage, all of these options have performed similarly. For no-till systems, subsurface injection of UAN solution and anhydrous ammonia would likely perform more consistently than surface broadcast applications. Surface band (‘dribble’ and ‘streaming’) of UAN would be intermediate.

Top-dress applications of UAN solution sometimes cause leafburn. Leaf bum becomes more visually apparent the later the applications are made and results from the ammonium nitrate portion of the N in UAN solution. Urea generally causes little, if any, leaf bum. However, if top-dress applications are made early enough to prevent leaf bum to the last developing leaves, especially the flag leaf, then there are no negative effects on grain yield. These cosmetic effects can be minimized by the same early applications that provide for best agronomic performance since air temperatures are cooler, and the amount of leaf tissue exposed is not as great as compared to later applications. Top-dress N application rarely causes much leaf bum when applied at spring green-up. All things being equal, the amount of leaf burn will gradually increase through jointing as air temperatures warm.

How Late Is Too Late For Top-dress Applications?

When top-dress N applications are not made before jointing, concerns arise regarding the practicality and profitability of making applications. These factors vary depending on the specific conditions present. Even if the field is expected to be only marginally deficient in N, profitable applications through Feekes Stage 7 (second node detectable) could still be made. Tire tracks would cause some damage since the growing point is now well above the soil surface, and applicators with narrow tires are recommended. Aerial application by airplane is best but is often not readily available. Rainfall is needed to move these applications into the root zone.

As the plant approaches boot stage, the decision becomes more difficult. If the field is definitely N deficient, an application of N would still likely be profitable if timely rainfall occurs, but provisions for not injuring the flag leaf would need to be taken. Dry materials by airplane would be the best choice. Again, the effectiveness of this application will be largely dependent on receiving timely and sufficient rainfall to move the N into the root zone. By early heading (Feekes Stage 10.2), the likelihood of a profitable response is probably gone except for in severely N deficient fields, and if rainfall is received immediately.