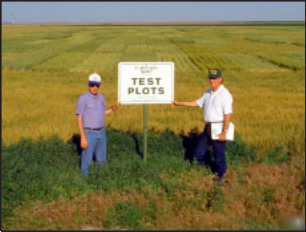 Producers should base variety selection on yield performance over several years and locations. Use a three-year average performance summary instead of performance in a single year or single location. Performance in a single year and/or location is unreliable because crop performance varies with environmental conditions, and conditions may not be representative of those that a producer will encounter on average. University variety testing programs generally are designed to predict the performance of one variety relative to others, instead of predicting actual grain yield. Variety performance may not be exactly the same on individual farms as predicted in trials due to limited test locations and the variable growing conditions of the region. In addition, yield performance is more difficult to predict than other varietal traits such as test weight, protein content, height, maturity, and disease tolerance or resistance. Plant new varieties on a small scale in your operation before using them on large acreages.

The end-use quality of winter wheat refers to the ultimate application for which the product (wheat) is intended for. Important characteristics that are valued by the end-user, such as milling and baking properties, must be considered by the grower. Growers can control variety selection and fertility programs, both of which are factors that affect quality. Variety descriptions provide information on varietal traits and can be used to select varieties predicted to provide good end-use quality. Reference the resources provided at the end of the chapter for more information.

Although yield performance and end-use quality are important traits to consider when selecting winter wheat varieties, other traits should be considered as well. These include winterhardiness, pest and disease resistance, herbicide tolerance, maturity, and plant height. There is no one perfect wheat variety for every location, but it is possible to use varietal trait information to select the best available varieties for a given location or expected conditions. In order to minimize production risks and maximize the chances for optimal economic returns, it is best to grow several varieties.

Maturity refers to the number of days that a variety takes to produce harvestable grain. Variations in maturity are useful for avoiding certain environmental stresses such as freeze injury, heat damage, drought injury, and disease. For example, late-maturing varieties may be less prone to late season frost because they are less likely to be flowering than an earlier-maturing variety. On the other hand, early-maturing wheat varieties may avoid the high temperatures and drought stress often experienced later in the growing season. Such varieties also are more likely to escape leaf diseases during grain fill. Choose a combination of varieties with a range of maturities to spread the risk from environmental stresses and the workload at harvest.

Winterhardiness refers to a plant's ability to withstand cold temperatures in the late fall, winter, or early spring. The importance of this trait will vary with the severity of the winter season. Abrupt drops in fall temperatures reduce the time available for developing winterhardiness and leave crops vulnerable to freeze injury (Figure 3.2). Management practices can help protect crops. For example, fields with standing stubble tend to have a warmer and more stable soil temperature than tilled fields. Standing stubble increases snow collection, which insulates by reflecting radiant heat back into the soil. In addition, stubble tends to delay spring regrowth, which can protect plants from early spring freeze events. 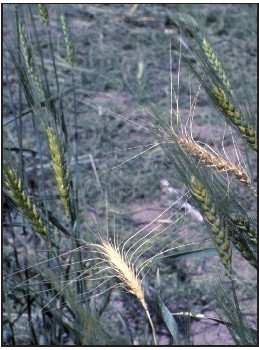 The need for disease resistance traits will vary with location. Resistance to foliar diseases is important in more humid regions, while wheat streak mosaic virus (WSMV) and leaf rust is of greater concern in the Great Plains. Look for varieties with at least moderate resistance or tolerance to diseases known to be important locally (refer to Chapter 9 "Disease Management of Wheat"). Resistant and tolerant varieties are available for Great Plains problems such as bunts and smuts, barley yellow dwarf virus, wheat soilborne mosaic virus, stripe rust, and stem rust.

Insect resistance traits are available in certain varieties and are useful in areas where a given pest is a consistent problem (refer to Chapter 7-1 "Arthropod Pests in Wheat"). Resistance is available to greenbug, Hessian fly, Russian wheat aphid, and wheat stem sawfly. Even moderate resistance may be sufficient to avoid expensive insecticide treatments. The selection of insect-resistant varieties is complicated by pest biotypes virulent on previously resistant varieties. Biotypes are known for greenbug, Hessian fly, and Russian wheat aphid. Variety descriptions will indicate which biotypes are affected by the resistance trait. Consider selecting a more competitive variety and relying on other pest management approaches if resistance is not available in a well-adapted, competitive variety. 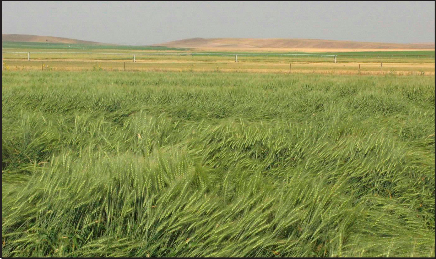 Plant height, straw strength, and coleoptile length are interrelated variety traits and should be used to meet the production conditions of different regions. The coleoptile is a protective structure that covers the shoot until emergence through the soil surface. If the coleoptile does not reach the surface, then the plant will die. Coleoptile length determines planting depth and is highly correlated with plant height at maturity. Tall varieties, with their longer coleoptiles, are better suited for planting deep into dry soils. However, such varieties tend to have weaker straw strength, making plants more likely to lodge (Figure 3.3). Varieties with good straw strength are less likely to lodge, but other factors, such as excessive nitrogen application or high rainfall, can reduce straw strength.