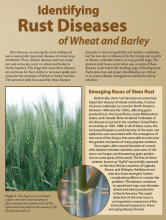 Rust diseases are among the most widespread and economically important diseases of cereal crops worldwide. Three distinct diseases, leaf rust, stripe rust and stem rust, occur on wheat and barley in North America. The fungi that cause these diseases are notorious for their ability to increase rapidly and overcome the resistance of wheat or barley varieties. The potential yield loss caused by these diseases depends on host susceptibility and weather conditions, but the loss also is influenced by the timing and severity of disease outbreaks relative to crop growth stage. The greatest yield losses occur when one or more of these diseases occur before the heading stage of development. Early detection and proper identification are critical to in-season disease management and future variety selection.