The Hessian fly is often cited as an example of an introduced pest that rapidly spread and caused serious damage to cultivated crops in its new environment. Thought to have been introduced during the Revolutionary War the pest now occurs throughout much of the eastern two thirds of the United States and in some of the wheat producing areas of the west coast. It is considered a major pest of wheat and occasionally infests barley, rye, and triticale and may survive on wild grasses. The Hessian fly has the capacity to cause devastating injury to wheat during periods that are favorable for its development. In many areas the Hessian fly has been managed fairly effectively using host plant resistance and a variety of cultural controls, however recent changes in cropping practices appear to be allowing this pest to reemerge as a wheat pest in some areas of the High Plains.

The adult Hessian fly is a tiny insect about 1/8 inch long, dark colored, and resembles a gnat in appearance (Figure 7. 39). On warm days during the fall, often following a rain, these tiny fragile flies emerge and females begin to seek the young leaves of fall-seeded wheat on which to lay their eggs. The period of adult activity is short, flies live for only a few days, and during this time, the females will deposit their eggs in the grooves on the upper surface of wheat leaves. Seedling wheat seems to be preferred.

The eggs, although very tiny, can be seen with the unaided eye and tend to resemble wheat leaf rust in its early stages (Figure 7.40). Within three to ten days the reddish, oblong eggs will hatch into tiny larvae or maggots. This is the stage that injures the plant. Eggs generally hatch in the evening and larvae migrate downward during the night when humidity is high. Larvae cannot survive in the exposed condition on the leaf surface during hot dry weather. The larvae move downward on the plant between the sheath and the stem and finally stop just above the crown at a site generally just below the soil surface. Larvae feed by withdrawing sap from the plant for a period of eight to 30 days. The rate of development is influenced primarily by temperature. Most complete their development before the onset of cold weather. Mature larvae are shiny, whitish, legless, and headless maggots about 3/16 inch in length (Figure 7.41). Full grown larvae gradually form 1/8 inch long, brownish, elongated, capsule-like cases (puparia) commonly called “flaxseeds” due to their resemblance to real flax seed (Figure 7.42). The insects pass the winter as flaxseeds.

Emergence of adults that produce the spring brood begins around the same time as wheat begins jointing in the spring. Females prefer young leaf blades for egg deposition. The point of attack by the spring maggots may be at the base of the plant, below the surface of the soil, or just above any of the nodes higher up on the stem. The generalized seasonal cycle includes the occurrence of a main spring brood, followed by flaxseed that lie dormant in the stubble until they emerge to produce the main fall brood. 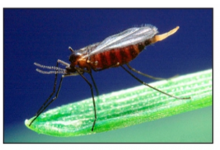 It is important, however, to recognize that a portion of the population fail to emerge as adults at any one period. Some of the flaxseeds survive in a dormant stage for weeks, months, or in some cases even years. Hence, the exact source of a given infestation may be difficult to document. This also allows for additional broods to develop. The presence of volunteer wheat in or adjacent to infested fields allow for the development of a summer brood when weather conditions are favorable.

Beginning signs of fall infestations may or may not be conspicuous. Infested shoots are stunted, but leaves of infested tillers become thicker and darker green than the un-infested tillers. Early infestations can easily be overlooked; however, infested tillers eventually begin to die. In severe infestations large patches or entire stands may be lost, especially if heavy infestation occurs shortly after emergence while the plants are in the seedling stage. If tillering has begun at the time of infestation, some tillers may be killied while others survive.

With spring infestations, the tissue of the stem near where the larva begins feeding appears to cease growth while the surrounding tissue continues to develop. This forms a niche just large enough for the maggot to develop in along the side of the stem. The injury may not be enough to kill the tiller, but the stem is usually weakened. This results in partially filled heads and stems that are prone to breakage just above the infested node. If infestation is severe, the stem may be killed outright. Low levels of infestation are not obvious and are frequently overlooked.

• Tillage. The fly population passes the period following harvest as flaxseeds in the stubble. Undisturbed stubble will favor the survival of the insects. Research has shown that thorough incorporation of the stubble can greatly reduce Hessian fly emergence. However, recent trends have been toward reduced or no-till planting, allowing increased survival of Hessian fly populations.

• Destruction of volunteer wheat. Volunteer wheat that is allowed to grow for a period of two to three weeks, especially in wet summers, can enable the fly to produce an extra brood and thus increase the number of flies available to infest fall planted wheat. Volunteer wheat not only serves to increase the population, it may also render other practices, such as planting after the fly-free date, less effective, by producing flies that are active later in the fall. Volunteer wheat left to grow through the fall and into the spring can serve as host to the fall generation, and subsequently, initiate spring infestations.

• Delaying Planting. The risk of fall infestation is almost always greater when wheat is planted in early fall. In many areas of the county researchers estab- lished “fly-free” dates by conducting a series of planting date studies to deter- mine planting dates that would reduce the chance of Hessian fly damage. The goal is to allow the main fall brood of adult Hessian flies to emerge and die before the new crop wheat emerges. Without live wheat plants available, the emerging female flies are deprived of a place to lay their eggs, and the wheat is therefore able to avoid fall infestation. There is still some risk if the main brood emerges later than normal or if for some reason a secondary fall brood develops. Therefore, delayed planting will reduce the infestation potential, but may not totally eliminate the risk of infestation. The fly-free date may be used locally on a field by field basis; however, they would probably be more effective where it is practiced on an areawide or community-wide basis.

Planting resistant varieties is often considered to be one of the best ways to reduce potential damage from the Hessian fly. However, currently, the availability of resistant varieties is more limited than we would prefer. To date, several resistance genes have been identified and have been or are being used in various wheat cultivars. However, depending on the predominate biotype of Hessian fly in a location, many of these genes no longer ensure an effective level of resistance, because virulence to these genes may be abundant in the local insect population. Thus, monitoring biotypes and altering resistance genes in locally adapted wheat varieties is an ongoing struggle. Yet growers should consider this option carefully during times when fly populations appear to be on the increase. It deserves special consideration where growers plan to plant early for fall pasture, and where the usefulness of other management options is limited.

While there are several species of tiny wasps that parasitize the Hessian fly, their impact and importance is often overlooked and little is known about how to conserve or increase their effectiveness to help manage Hessian fly populations.

Monitoring for Hessian fly should be done in both the fall and spring, especially if damage symptoms are noticed or if Hessian fly has been noted to be a problem in the area in previous years. In the fall or winter, search for Hessian fly larvae or pupae at the base of the plants if abnormal growth occurs (as mentioned above) or if dead plants or tillers are observed. Examination of an infested plant will usually reveal an undeveloped central shoot with an unusually broad and thickened dark green leaf. To confirm the diagnosis, carefully remove the plant along with the roots from the soil and look closely for maggots or flaxseeds by gently pulling the leaf sheath away from the stem and inspecting carefully in the crown area. In the spring, check for Hessian fly anytime white heads or lodging is noticed prior to harvest.

If 10 to 20 percent of tillers are infested with multiple larvae in the fall, then spring infestations are likely to be heavy if weather conditions are favorable. However, if spring weather is hot and dry then damage could be less. Noticeable spring damage from Hessian fly should trigger adoption of special efforts to reduce the potential for Hessian fly the next season (destruction of volunteer, selection of resistant varieties, and delayed planting), in a effort to reduce the build up of Hessian fly populations.

There are no chemical controls available once plants become infested. However, some of the newer systemic seed treatments do provide some protection from fall infestations of Hessian fly and may be useful in fly-prone areas when planting susceptible varieties early in the season.