Dual-purpose wheat generally requires more fertilizer than grain-only production. It takes approximately 30 pounds per acre of nitrogen to produce 1000 pounds per acre of wheat forage. While some of this nitrogen is returned to the system via urine and manure, it is not evenly distributed and has minimal effect on subsequent grain yield. Nitrogen removed from the production system via grazing should either be accounted for by additional pre-plant nitrogen application or by top-dress applications in the spring.

Figure 6.5 The plant on the left received an in-furrow application of phosphorus and had faster emergence, increased early-season root growth, increased tillering, and more forage growth than the plant on the right. 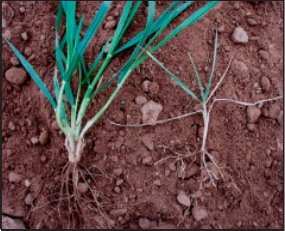 Low soil pH has a greater influence on wheat forage production than grain yield. One of the primary impacts of low soil pH is reduced phosphorus availability. The wheat plant has a much shorter period of time available for root growth and interception and uptake of plant nutrients for forage production than it does for grain yield (Figure 6.5). To overcome this limitation, 20 to 40 pounds per acre of phosphorus fertilizer should be placed in-furrow at planting. In-furrow application of P fertilizer is more efficient than broadcast application. In fact, when used in combination with an acid-tolerant wheat variety, in-furrow application of P fertilizer can be used as a “short-term” alternative to lime application on rented or marginal soils.