The fall armyworm is thought to be a native pest of the western hemisphere but does not overwinter in the High Plains and must migrate northward annually from southern states. It is a sporadic pest that can damage early planted wheat in the fall. Fall armyworm populations are a more common problem in the southern plains.

The hind wings of fall armyworm moths are grayish white, and the front wings are marked with distinctive dark gray, brown, and white splotches (Figute 7.24). Eggs are deposited in masses on the undersides of foliage, and the masses are fuzzy with scales from the female's body. Fall armyworm larvae are usually brown, but color variations occur ranging from green to nearly black. They have four distinct spots arranged in a square on top of the 8th abdominal segment (Figute 7.25). The front and sides of the head have distinct reticulations, and the front of the head is marked with a pale, but prominent, inverted Y. Larvae are 1 1/2 inches long when mature.

Moths usually arrive in late summer and lay eggs on corn, sorghum, and other summer crops. Reproduction may continue through August and into September, putting early planted wheat at greatest risk.

The first sign of damage is windowpane injury caused by tiny larvae chewing on seedling leaves. The larvae, which are usually too small to be easily observed at this time, hide in or around the base of seedlings. Within a few days the larvae are large enough to destroy entire leaves. Larvae increase in size at an exponential rate and so do their food requirements. Later instars do the most damage, sometimes destroying entire stands, and are the least susceptible to insecticides. 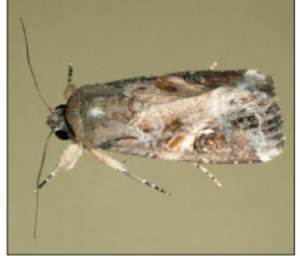 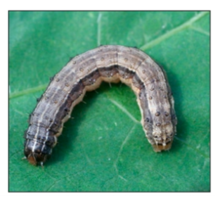 Since this insect generally is an early fall pest, later planted fields are less likely to become infested. Early planted fields should be inspected frequently during the first few weeks following emergence. Without treatment, problems can continue until larvae reach maturity or until there is a killing frost. Fields with 25 to 30 percent of plants with windowpane injury should be reexamined daily and treated immediately if stand establishment appears threatened. Several insecticides are currently labeled for fall armyworm control and should be effective if treatments are applied when larvae are small.