There are several species of grass bugs found in the region, but the most common is the black grass bug. Labops is about ¼ inch long and black with buff colored edges on the wings and whitish markings on the head (Figure 7.43). The wings of the adult females are shorter than the abdomen, and those of the males extend beyond the end of the abdomen. Immature stages are similar in appearance to the adults but do not have wings.

Black grass bug has a single generation each year with the active period confined to the spring. It overwinters as eggs in the stems of the host, hatch in the spring (April), and begin feeding on the host Throughout a four to five week period, the insect develops through three immature stages before becoming an adult. When mature (May), the females mate and lay eggs in the stems of their grass hosts. Their preferred hosts include wheatgrasses, especially crested wheatgrass. The short wings of the females limit their mobility, so their infestations are most often limited to field margins.

Black grass bug has piercing-sucking mouthparts, and feeding results in yellow to white spotting at the feeding site. As feeding damage increases, the leaves show extensive white speckling (Figure 7.44a & b). Extreme damage results in a nearly white or frosted appearance of the plants. The greatest impact of this insect in wheat occurs when the flag leaf is extensively damaged because the leaves do not replace the chlorophyll lost through feeding. Extensive damage will result in reduced seed yields and reduced forage quality.

Black grass bug problems in wheat seldom become serious. High risk situations include areas where wheat is planted next to wheatgrass pastures or ditches. In these areas black grass bugs will be restricted to the field margins. Because it survives the summer and winter as eggs in the stem, this insect can also build up throughout the field in no-till continuous wheat.

The infestation potential for the black grass bug can be substantially reduced by haying or grazing wheatgrass areas that serve as breeding sites. Eggs present in the grass stems are removed and the subsequent population is reduced. 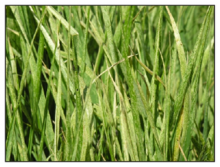 Where wheat is planted next to wheatgrasses, black grass bug populations should be monitored to determine the potential for bugs to move into the adjoining wheat. Treatment of the margin of wheat fields can be done to control black grass bugs if infestations warrant. It is important to time the control of black grass bugs early enough to prevent extensive damage because wheat plants do not recover after they have been damaged. No thresholds have been developed for these situations, but monitoring black grass bug presence would be important where damage had been noticed the year before.