The army cutworm is a regular pest that is distributed throughout the Great Plains because its life cycle ties it closely to the regions just east of the Rocky Mountains. In most years it reaches economic infestations in some areas of the Great Plains, but these areas shift unpredictably from year to year. It can feed on an array of crops and weeds, but most of its economic impact is limited to winter wheat and alfalfa because these are the vunerable crops growing in the early spring when larval feeding activity occurs.

The army cutworm moth has a wing span of about 1 3/4 inches and is typical of the "miller moths" that are commonly observed in the region (Figure 7.17). The moth has five color forms, ranging from a lighter form with fairly distinct wing markings to a darker form with less distinct wing markings. Female army cutworm moths lay their eggs directly in loose soil. They seem to be attracted to bare areas such as overgrazed pastures, alfalfa stubble, stressed grassy areas, and newly plants or tilled cropland. Females lay from 1000 to 3000 eggs from late August through late October. The result of this extended egg laying period is a great variation in larval size within fields.

The eggs hatch shortly after they have been exposed to moisture (i.e., rainfall). Larvae continue to feed as long as temperatures are favorable and can be found actively feeding through the winter when temperatures are warm enough. During cold conditions, the partially grown larvae overwinter in the soil. Larval feeding activity resumes in late winter or early spring when soil temperatures increase. Army cutworms become active at relatively cool temperatures, possibly even below 40F (4C), because solar heating warms soil temperatures will above the air temperature. Feeding continues through the spring, when fully grown larvae burrow into the soil, create an earthen chamber, and pupate. Adults begin to emerge from the soil in late April (Oklahoma and Texas) or May (Nebraska and Wyoming).

Generally, larvae of the army cutworm have a pale grayish body color that is splotched with variable white or light markings (Figure 7.18). The upper surface is lighter with a pale stripe along the center of the back. There is a lighter band along the side of the larvae below the spiracles. Larvae can attain lengths of 1 1/2 to 2 inches. 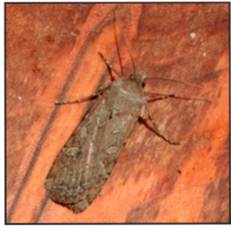 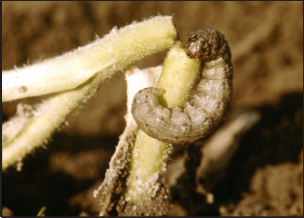 The most prominent trait of the army cutworm moth is its migration pattern. Adults emerge from April through early June and feed locally on a variety of nectar bearing, flowering plants. These moths gradually migrate westward toward the Rocky Mountains and continue to feed on available nectar sources as they ascend in eleva- tion. As they move westward, they rest during the day in dense vegetation or sheltered areas. They are attracted to lights, and during outbreak years, tremendous numbers of army cutworms can congregate in towns and around residential areas. Moths may remain in these areas for several days, feeding on local nectar sources, especially trees. However, when temperatures begin to warm consistently and flowering of major trees in the area has ceased, the moths will move westward to higher elevations offering cooler temperatures and new sources of food. The moths spend the summer in the Rocky Mountains, and in late August and September they return to the plains to mate and deposit eggs.

The army cutworm has a wide host range that includes alfalfa, barley, corn, oats, potato, sugar beet, wheat, many vegetables, and a number of grasses. The army cutworm is a climbing cutworm that grazes on the leaves of its host plants. In the early spring, when wheat plants are just breaking dormancy and leaf area is limited, the army cutworm may keep the new plant growth completely clipped back. This results in delayed green-up of wheat, and if feeding continues, stand losses will occur (Figure 7.19). Under high populations larvae tend to migrate, all moving in the same direction in large numbers, often devouring any green vegetation in their path. This behavior has resulted in the name army cutworm. The leading edge of this army can contain 20 to 30 larvae or more per square foot.

There are few management options available to reduce the severity or damage potential of the army cutworm. The primary management option is to scout the field to assess cutworm populations and treat if infestation levels reach the economic threshold.

Moth populations in the fall can be determined by using pheromone traps to monitor moth flights. This information can be used to predict the risk of serious infestations the following spring. Pheromone traps are easy to use and monitor the army cutworm because the lure is specific to the army cutworm. Traps should be set up by late August and monitored through October. High risk situations would result from trapping a total of more than 800 army cutworm adults for this 8 to 10 week trapping period. Other environmental factors will influence risk levels as well. If trapping indicates a high risk situation, further field scouting should be done in these areas during the spring green-up of wheat to determine the extent of the risk for individual fields.

Wheat fields should be monitored periodically during late winter and early spring just as the winter wheat is breaking dormancy. Army cutworms are not always easy to detect. Larvae hide in loose soil at the base of plants or under soil clods during the day, and can be found feeding on plants only in the evenings and on cloudy days. Early on, small feeding holes in the wheat leaves are an indication that cutworms are present and feeding. Serious infestations will result in extreme defoliation and minimal or no regrowth. The density of cutworms (number per square foot), the condition of the wheat, and the extent of regrowth are important considerations in determining the need for treatment. Healthy growing wheat can withstand substantial defoliation. However, if plant growth is limited due to stress (e.g., drought stress, cool temperatures), the cutworms may feed down to and injure the crown of the wheat plants.

Treatment thresholds depend on how vigorously the wheat is growing. If wheat is slowly coming out of dormancy due to stress or cool temperatures (e.g., drought, no­till situations), the effects of army cutworm feeding damage will be increased. Under these conditions, two or more cutworms per square foot may cause economic damage. If wheat appears to be growing well, four or more larvae per square foot may be needed to cause significant damage. Pyrethroid insecticides are particularly effective in controlling these cutworms in wheat.

A number of parasites, predators, and diseases are important influences on army cutworm populations. The impact that these natural enemies have on damage potential is not well understood, but their presence increases during high infestation periods. Perhaps the most effective predators are the various types of birds that feed on these insects when they are abundant.