10. Freeze Injury and Other Environmental Stresses

Cold injury symptoms of winter wheat can be observed at most stages of development. Newly emerged seedlings may show a white to yellow or purplish color band on leaves when warm days are followed by much cooler nights. Usually, neighboring seedlings will show similar symptoms at the same location on the plants. Symptoms will fade as seedlings become cold hardened. After plants are hardened by declining autumn temperatures, wheat can survive very low temperatures with few harmful effects. However, even cold-hardened plants can be injured when soil temperatures at the crown depth approach 10°F (-12°C). Wheat in dry, loose soils is more subject to cold injury than in moist soils because the cold penetrates more rapidly. Also, winter injury is more common on terrace tops and north-facing slopes. Generally, winter injury symptoms are most noticeable as uninjured plants begin to green up in late winter. Injured plants either never green up or slowly die during green-up as the vascular tissue deteriorates and microorganisms invade the damaged tissue. Cold injury also occurs after green-up when cold hardiness has been lost, followed by a rapid drop in temperatures.

Soil heaving, which often occurs in fine-textured soils, can leave plants with exposed crowns and roots. These may green up but will eventually die. Soil heaving occurs as the soil freezes and thaws during the winter, and ice lenses form under a dry soil surface. As an ice lens expands, moisture migrates toward the lens causing further expansion. If expansion occurs at or below the crown of the wheat plant, the crown is pushed out of the soil (Figure 10.1).

Figure 10.1 Plant crowns and roots are pushed above the surface due to soil freezing and thawing. 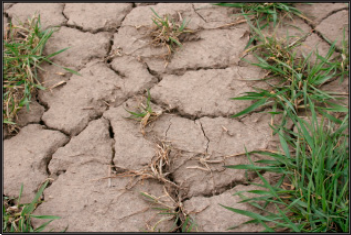 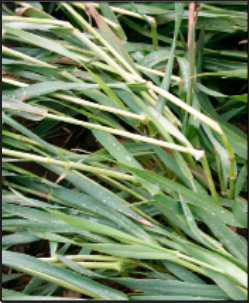 Freezing temperatures may cause leaf tips to yellow and die back from the tip on actively growing plants. This type of injury, which resembles topdress nitrogen burn,
is minor and plants will grow out of it. As jointing occurs, low temperatures can cause damage to leaves, nodes, and stems. Initially, leaves may darken and appear water-soaked (Figure 10.2). The damaged area of the stem may be bleached, water-soaked, and soft and eventually will become rough and dark. This area may bend or kink causing the stem to lodge (Figure 10.3). If the stem is not killed, it will bend at the node and begin to grow upright. If the growing point is killed, a chlorotic leaf will appear in the whorl (Figure 10.4 a & b).

Figure 10.4 (a) A chlorotic leaf whorl indicates freeze damage to the growing point. There may be no other apparent damage. 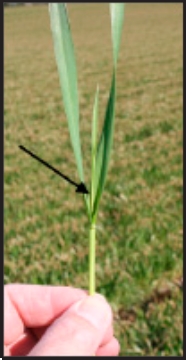 Figure 11.4 (b) With time chlorotic leaves will be more obvious. 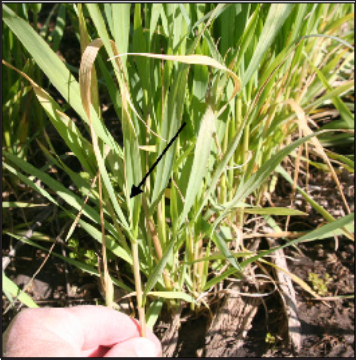 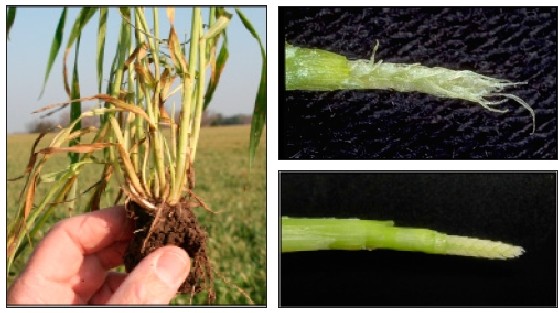 New tillers will form because the apical dominance of the primary tillers is now gone (Figure 10.5). Split stems, due to ice forming internally, generally die as temperatures rise or when the stems lodge. A damaged head appears off white, dried out, and fluffy (Figure 10.6). It will eventually tum whitish-brown and shrivel. However, a healthy head has a whitish-green, tuigid appearance (Figure 10.7). Undamaged plants develop normally, while damaged plants will not grow and leaves will become chlorotic. The general appearance of the field will be yellow and ragged, with healthy plants taller than damaged plants (Figure 10.8).

Figure 10.8 Freeze damage is most pronounced in the low areas of the field, near the center of the photo. 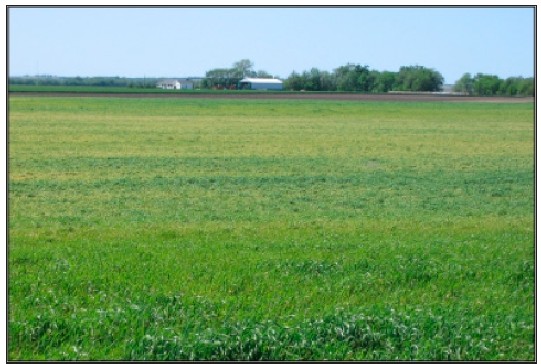 Figure 10.9 A wheat head suffering from freeze injury as compared to a healthy one at right. 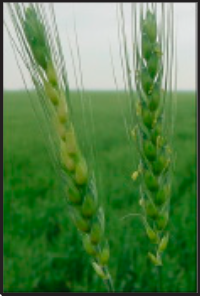 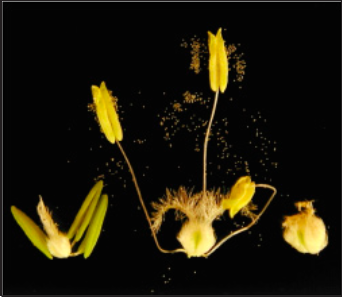 Freezing temperatures during boot stage may damage the head, stem, and leaves of wheat. The base of the head may emerge first, or the head may emerge from the side
of the boot. Damaged spikelets will have a yellowish, water-soaked appearance in- stead of the normal crisp, green color (Figure 10.9). A light freeze may bleach exposed awns.

Temperatures near 32°F (0°C) can cause damage as the head emerges from the boot and initiates flowering. It takes three to five days for the head to fully extend above the flag leaf before flowering begins. Flowering will begin in the spikelets, about 2/3 up the head, and will progress up and down the head over a three to five day period. Each spikelet contains two to five florets. Three lime-green anthers and a stigma, with two fluffy, white branches, are contained in each floret. Pollen is released as the anthers are pushed upwards and the pollen lands on the stigma (Figure 10.10). The yellow to white anthers eventually push outside the floret. Within ten days after flowering, kernels should nearly be full length. Each spikelet generally produces two to three kernels.

When freezing temperatures occur at this stage there are several things that can occur. Temperatures at or below 32°F (0°C) damage the anthers, which are more sensitive to cold than the stigma, causing floret sterility. Anthers will become shriveled and twisted while they still have their lime-green color. This can be detected with a hand lens within 24 hours after the freeze. Over several days, the anthers will not elongate, and they will continue to shrivel and turn whitish-yellow. In this situation, anthers will not shed pollen, but if the stigma is undamaged it may still be receptive to pollen from undamaged anthers in other florets. However, if the stigma was damaged, it will not open to expose its two fluffy branches, and it will become shriveled and whitish-brown. If temperatures remain cool after a freeze event, symptoms will be slow to develop, but as time passes kernels should continue to develop if there was no damage. Lack of kernel development indicates some form of freeze injury occurred.

Freezing temperatures can damage kernels well into the dough stage. Undamaged kernels have a light-green appearance while injured kernels will be rough, shriveled, and whitish-gray. Freeze symptoms on kernels in the dough stage include shriveled, chalky kernels and lower test weights. Also, the small structure that attaches the spikelet to the head, called the rachilla, can be damaged by freezing temperatures. Kernels will cease to develop, and eventually the spikelet may fall from the head causing grain­shattering losses.

Plant lodging can be caused by a number of factors (Figure 10.11). The most common reasons for lodging are high seeding rates, high nitrogen or fertilizer rates, and excessive irrigation or high rainfall. Lodging often occurs first in low areas of the field. There are differences among wheat varieties in their lodging resistance. Tall varieties tend to lodge more than semi-dwarf varieties. There are some pest problems, such as strawbreaker and Hessian fly, that cause lodging. Also, strong winds with heavy rainfall cause plants to lean or lodge. Immature plants that have lodged likely will recover, but plants that have lodged during later grain-fill stages will often remain lodged, causing harvest difficulties. If lodging occurs early, yield reductions can occur. Freeze damage on the lower stems can cause lodging as well.

Figure 10.11 Plant lodging can be caused by a number of environmental, chemical, biological, and varietal factors. 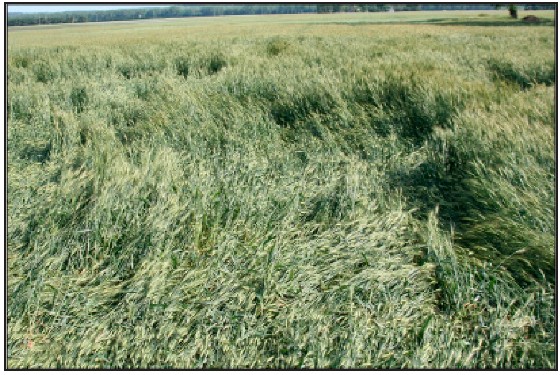 Figure 10.12 Problems with head emergence occur due to hail stone impact (note the mark halfway down the stem from hail impact). 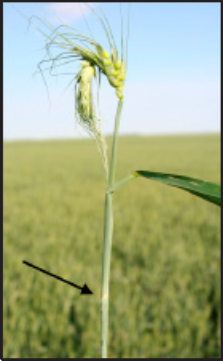 Generally, hail prior to jointing rips or shreds leaves causing little permanent damage. However, hail events in later stages can cause minor to severe yield losses. The most serious hail damage occurs when the stem below the head or boot is struck by hail stones, causing severing or kinking of the stem. Also, direct hits by hail stones to the head can damage the whole head or parts of the head. This can cause severe grain shattering. Direct hits by hail stones while in the boot stage can damage the head, causing it to get trapped inside the boot (Figure 10.12). Damaged heads tend to be gnarled and misshapen as they emerge. Hail stones hitting the stem will result in bruising. The leaf sheath may become chlorotic, and the stem eventually lodges much later as grain fill causes the head to become heavier.

If a packing rain occurs soon after planting, the soil crusts and the elongating coleoptile cannot penetrate the soil surface. When this occurs the coleoptile will bend, the first leaf will emerge under the soil surface, and the seedling will not emerge.